Many of you remember the early days of YouTube when you didn’t have to sit through thirty seconds of advertising to watch 2 minutes of video. To get advertising free video today you you have to pay $10 for YouTube Red. You pay with your time or you pay with your money, but either way you pay.

At first we were able to interact with friends and family for free. Our businesses were able to reach followers easily and the platform promised deeper engagement with friends and family. Then Facebook began to “monetize” the platform and suddenly we’re all getting posts from companies we don’t care about related to products we don’t want to buy. Worse? Facebook has begun to charge people to reach their own followers.

Matt Innman of the Oatmeal sums it up nicely here: 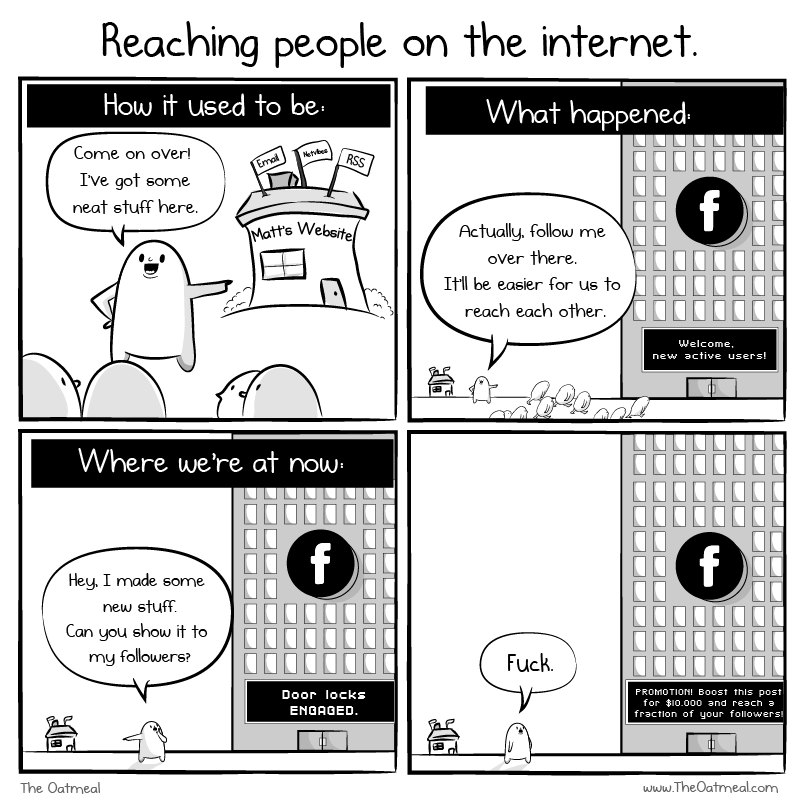 Matt Inman sums up Facebook’s strategy nicely. Like Matt? Buy something from him.[/caption]

Now we are entering the era of voice assistants.

Speakers and other devices that sit in your kitchen and answer questions, play music and control IoT devices. All for free. Just purchase a heavily subsidized speaker and use the assistant for any number of tasks.

It reminds me of a certain horse from Greek mythology. Mycroft AI Beware of Greeks Bearing Gifts1201×601
Right now, today, Silicon Valley Giants Google and Amazon are giving away their voice assistant. At CES 2018 Assistant and Alexa were everywhere. They are doing deals with companies to deploy their tech in cars, thermostats, speakers, fans, cooktops and nearly everywhere else users touch a device. Why? Because somewhere down the road they plan to “monetize” the platform.

Consumer Watchdog has warned that patents filed by Big Tech include all types of nefarious behavior that some would consider spying. Think about it. A device that sits in the user’s kitchen and listens 24/7/365. Big Tech can listen to everything that happens in the house, customize online advertising and predict what consumers are going to buy. One Google patent describes identifying a child holding a basketball and then selling the family on a sports camp. It is a data driven company’s dream.

“But the technology is so compelling!”

Yes, the ability to control your environment with your voice is the first step toward our digitally augmented future, but we should be careful to understand what we are giving away in exchange. Today Big Tech is saying “we are not listening all of the time”, but as we’ve seen with YouTube, Facebook, Hulu and countless other digital products - terms of service can be altered on a whim. A device that is listening selectively today may be listening all of the time tomorrow.

This is one of the reasons the Mycroft project is important.

Here at Mycroft we’ve embraced both privacy and user agency. We don’t track our users or sell their data. We don’t even keep their data unless they explicitly opt-in to help train the AI. And our source code is open. Anyone can inspect the code and see exactly what we are doing with user data. This transparency ensures good behavior and creates trust between Mycroft the company and Mycroft the community. alexa echo dot-on puppet strings-02 Mycroft AI1946×1632
We’ve also embraced the idea of user agency. The Mycroft agent is being designed to represent you the user, not us the company. Think about it. When you call for a rideshare do you want the best service at the lowest price, or do you want the service that paid the voice assistant company to be the preferred rideshare partner? Do you want the voice assistant to represent your interests or the interests of some Big Tech giant.

Voice technology is too important to the future of human-machine interfaces to leave it in the hands of Big Tech companies that have proven to be irresponsible and greedy. That is why you should support Mycroft - an open, privacy-focused voice assistant for everyone who isn’t a Big Tech giant.

Nice post. Now a day our privacy has gone due to this technologies. But there are people who don’t care about this and enjoy using new technologies. And this smart speakers like Amazon Alexa, Google Home and Apple HomePod are very dangerous as this device track each and every activities of ours. Many people have also reported issues.

Very true and definitely needed for people to have alternatives. However, what are the financial incentives for developers to support the Mycroft platform? There needs to be some type of motivation to encourage a healthy ecosystem and the development + maintenance of useful skills.
I hope the Mycroft team is thinking of the importance of nurturing an ecosystem as the shipment of the Mycroft II will no doubt spur a wave of interest and engage new developers.

Hi @searchy2, having the ability for Skill Authors to charge for Skills is something that we are considering longer term, but it’s not an immediate priority.

Some type of motivation to encourage a healthy ecosystem

Mycroft at its foundation is an open source software and hardware project - and part of that ethos is that the whole Community is able to contribute to the ecosystem in the way that they’re able - through training Wake Words or STT transcriptions, by providing feedback on Skills, by providing assistance to others in Chat or the Forums - or indeed - by developing Skills for others to use.

Mycroft has invested millions of dollars in providing an open source voice framework - essentially giving this amount of value to the Community for free - and part of that equation is that the Community in turn contributes to the ecosystem.

Currently we have nearly 25,000 users, tens of thousands of installed devices and dozens of available Skills - so while our ecosystem can always grow, I’d categorise it as fairly healthy already

I look forward to getting my hands on the Mycroft II and seeing what it can do. I have quite a few ideas bouncing around! I’m glad to see the Mycroft Market up and running. It looks great! The name Market beguiles that eventually you’ll be able to buy and sell on it. Or should the name be changed to Mycroft Library? Either way, I look forward to seeing what people are going to build! The open source platform is really nice to have and be an alternative.

facebook, youtube and other platforms are now more towards earning money then providing ad free content to their users so they have floodeed messenger, videos and chats with their ad’s, soon we will see advertisment on whatsapp too.