It’s important for artists to be compensated fairly. I was wondering how Pandora and Spotify do compared with other music streaming services.

If artists’ recordings are streamed 1000 times, here is what one source claims the music streaming services pay out in royalties.

So P&S don’t stack up so well. Has anyone looked into a music playing skill based on Napster, Tidal or Deezer? Having such skills could drive those platforms’ adoption rate…

Hey mike, interesting data. I’ve seen a bit of renewed push back on Spotify in the last couple of weeks because of artist pay and looking at this it makes sense.

I also can’t believe Youtube Music is so abysmal!

There’s one or two Deezer Skills out there, and we’ve been looking at Tidal, but Napster wasn’t on my radar at all - will definitely take a look at them

@gez-mycroft - Cool that you will look into them. I did a ‘Contact Us’ for each of the three - maybe there will be some interest in the other direction too.

Cool that you are looking into it.
I don’t currently use MyCroft, but I got here because I am looking for a smart speaker that can stream Tidal.

Someone gifted me a Google Nest. When my kid asked it to play a song it wouldn’t and suggested we subscribed to YouTube Music.

I refuse to subscribe to one of the bigger services that pays artists a pittance, so I started looking for different smart speakers and ended up here.

Really hoping that a Tidal skill will added!

There is a Tidal Python API Client around, if anyone wonders.

There is also an Apple Music API…

If Emby and Jellyfin have APIs that are supported and Tidal and Apple have APIs that are not, might an abstraction layer be written to make adding other music services easier? I don’t have enough background to write it, but it was just a thought that might be worth floating …

The challenge with so many of them is that they often have something buried in their T&C’s that preclude using it in any voice assistants - but then provide exemptions to Google and Amazon… So for community Skills this is unlikely to be an issue but for official Skills we don’t want to end up in the same place where we have with Spotify.

We’re exploring the legal questions around all this and have been talking about the various ways we can completely legitimately use services without just flying under the radar. Piggy backing off another system as you’ve suggested is one possibility.

The team are getting together face-to-face next week and we’ve got this on the agenda. So I’m hoping we’ll have some movement soon.

Thanks for the reply.

Good to hear it’s on the agenda. I’ll be watching this space.

Just curious. Why is there such a wide range in payouts? Also, once active on Mycroft how will the music streaming service be compensated?

@MarKarm123 - tough question on why such a varied payout - maybe some services are trying to do the right thing, and others aren’t too worried about it? Not sure how negotiations come into play.

Second question is easier as I understand it - Mycroft will only be the vehicle to choose which songs to play. The relationship between the user and the streaming service (and thus the artists) will be unchanged.

One other challenge that we have to overcome is that many of these streaming services require an official agreement to use their API, especially in a product like ours. Several of them even have a special agreement for Voice Assistants as Gez mentioned. Also these services prefer to create and control their own applications.

For example if you look at Spotify, they have apps on all kinds of different products (Android, iOS, Windows, Android TV, Roku, Fire Stick/TV, etc…) and in each case Spotify is the application owner. In reality I’m sure there was some collaboration between Spotify and the hardware/platform provider to develop the application, but when you look at the developer name for any of those apps you’ll see “Spotify AB” the legal identifier for Spotify.

We have been somewhat naive in our process, we named our Pandora playing skill simply Pandora despite the fact that we haven’t developed it in collaboration with Pandora nor do they have any ownership over the application. We will be working to change that type of behavior and encouraging community developers not to name skills in a way that would imply they have been developed by another organization or in cooperation with that organization.

The absolute best course of action is to develop partnerships with music services to create official skills. I do like the idea of approaching Napster or Tidal as Mycroft’s preferred partner. Maybe we could eventually work out a business deal as well. I think Tidal is an interesting choice because they already have a deal with Plex. To me this means they are interested in servicing the more technical and enthusiast users out there.

@Ryanroy8337 welcome to the community.

There are a few skills out there for several music services

You can find mine here, youtube-music, soundcloud, bandcamp and deezer are the most relevant ones to this thread

MANDATORY DISCLAIMER: all this code is in alpha and not production ready, depending on when you read this you likely will run into dependency issues and need to install a few repos from source 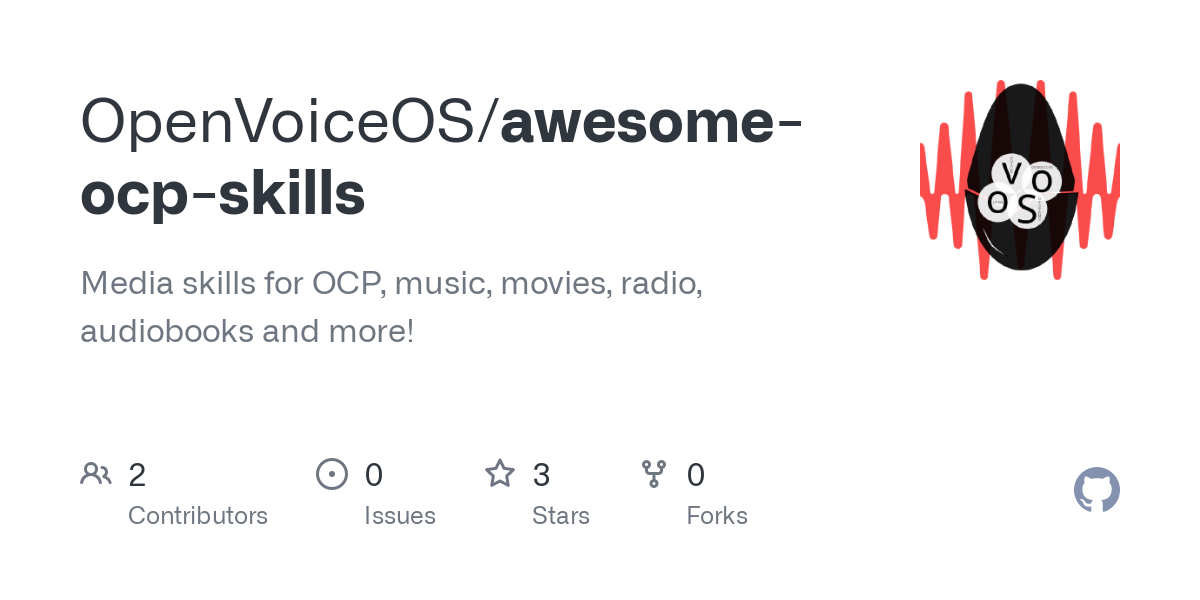 Contribute to OpenVoiceOS/awesome-ocp-skills development by creating an account on GitHub.