I’ve been following the progress of Mycroft and similar open-source digital assistant frameworks for some time, and one area that I’ve always found to be quite challenging is a good wakeword/wake phrase framework and pre-trained models.

Mycroft Precise works fairly well, but it is relatively difficult to collect data for training new models and the false-accept rate is a bit too high in many cases. Commercial options like Picovoice Porcupine can work very well, but the limitations on custom models in the free-tier (while totally understandable) limits many applications.

As such, I’ve been working for some time on a new open-source framework and set of methods to build wakeword/wake phrase models, and the initial version was just released: openWakeWord.

You can also try a real-time demo right in your browser via HuggingFace Spaces.

By leveraging an impressive pre-trained model from Google (more details in the openWakeWord repo) and some of the text-to-speech advances from the last two years, I’ve been able to train models with 100% synthetic audio and still show good performance on real-world examples. For example, here is the false-accept/false-reject curve for Picovoice Porcupine, openWakeWord, and Precise for a “hey mycroft” model based on real-world examples that I collected. None of the these models were trained on my voice at any point. 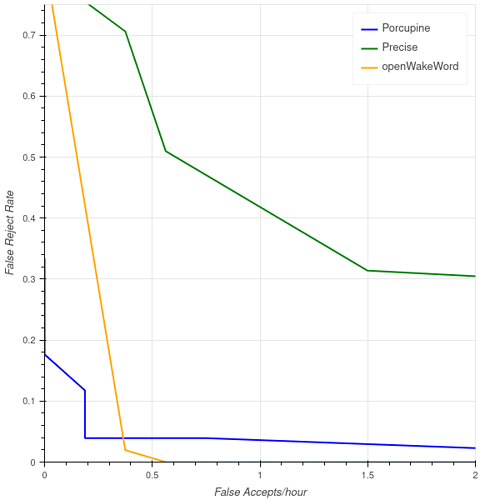 If anyone finds this interesting or useful I would greatly appreciate feedback on how well the models work for different voices and environments, as well as general suggestions for new features and improvements.

New ovos plugin for this coming up, but only on 2023

Will check it out.

very nice! is there a plugin to integrate this into mycroft already, is that being worked on? I couldn’t find docs on integrating…

@JarbasAl, thanks for offering to work on a plugin! Let me know if you run into any issues, happy to assist.

Hopefully it’s relatively simple to integrate. Looking at how hotwords/wakewords are handled in Mycroft Core (e.g., here) as long as the frame data can be prepared properly calling the openWakeWord models themselves should be straightforward.

Thanks for such a cool project!