I have just installed the Picroft_Buster-Keaton_2020-01-10 onto a 4GB RPI4 and I am using a Respeaker 6-Mic Array. Everything installed and works, I have just one issue till now and this is the alsamixer. After reboot the CH3 (3rd mic) jumps back to 0 which means that I lost 1 Mic from the 6. 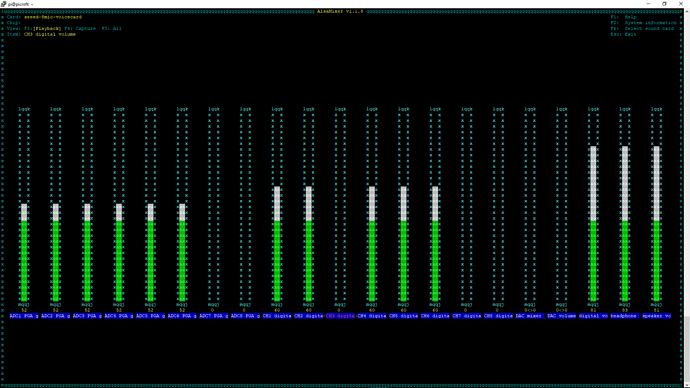 I tried to save the setup like it is written here but it not helped:

I don’t know if it is Mycroft or Seeed voice card issue but maybe somebody had the same issue before here and can help me out.

Thats the ReSpeaker 6 Mic Array for Raspberry Pi I guess.
The hardware for the Respeaker models is really good, the drivers I am finding are truly woeful.
I actually would wager that you will find its a problem or clash with the Respeaker driver but respeaker will always blame whatever there driver clashes with even if there driver seems to be the common item in a collection of differing clashes and configurations.
If your getting an respeaker think about a USB one purely because it doesn’t need drivers.
Sorry but do have a hunch what its likely to be.

You can try and file an issue on github but you may recieve a reply like this.

pulseaudio doesn’t work is a pulseaudio problem. You should test with aplay / arecord to assure correct functionality. You have not heard that the author of pulseaudio (also being the author of the well-loved-not systemd) often get death threats for making strange and controversial decisions?

If you need my advice on a sound device with a simplier driver that’s up to date with current kernel development, have a look at the octo card of audioinjector.net . It offers similar functionalities (just rather not-pretty, as in the actual external physical appearance) with an “up-to-date to current kernel” software stack.

I thought the Samsung illustration is sufficient - Seed Studio builds the respeaker for a “standard raspberry pi setup” (i.e. raspbrian). Anything else, well, it is extra, and I’d be happy they do it but not too upset if they don’t. They never claim that it would run on anything else. Until Raspbrian itself moved to 64-bit and a more current kernel, I am okay with anything being DYI. Same with Samsung’s TV - okay they charge a lot of money. The TV is for watching TV programmes, and I am not expecting any big help from them on reading their firmware files (my fun activity) any time soon. Expecting Samsung to want to help me to run their firmware file system driver on current desktop linux, is ridiculous.

or none and unfortunately same in the Seeed forum.