What is the Mycroft Mark 1A

Did I miss something obvious here? I was scrolling through Facebook last night, which is becoming a more and more rare occurrence, when I scrolled over a sponsored ad from Mycroft. “Invest in Open Source Voice AI” it said. On the add was a picture of a Mark II, and a device I haven’t seen before with a box labeled Mycroft Mark_1A. I hadn’t heard about it. it was a white, hockey puck looking device. Is this something new that we (more likely I) haven’t heard about? How did I miss this and why can’t I find any information about it?

Then you also missed the Mark-3 !

Mark-1A was explained to be basically the final product for end consumers once the software is in end consumer state. The Mark-1 is basically a dev / hobby version for developers based on a RPi.

It is discussed somewhere on these forums, but even with the search I can’t find it back. 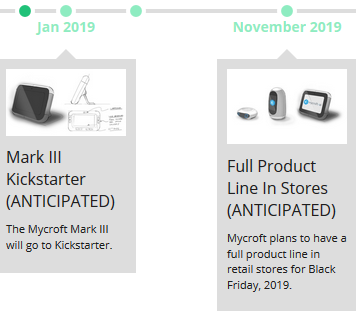 Noticed something interesting on the investment site: Mark 3!

Pretty exciting! Personally agree with having the Mark 3 “smart display”. Hoping for a camera with video chatting and a mechanical shade on it. Might have to get one for my grandma. Good to see the team is also planning for a retail presence. Keep...

You can see the Mark 1s in these two images are dramatically different.

I haven’t found that particular brand of Mark 1 anywhere else. I guess I need to pay more attention!

In chat they mentioned it’s a concept idea they’re working on, and may (or may not) be made.

I did find a mention of it from about a month ago where they barely referenced it in passing. A $50 Mycroft unit would be a huge boon to sales. I know a lot of people that are concerned about privacy and still have an interest in voice assistants, but can’t afford to drop $100-$200 on a device. They’ll install it on their computer, but they can’t afford to invest. This would go a long way toward putting those people back into play.

@linuxrants, I fully agree with you a <= $50,- device for that huge market segment is really needed. However that same segment is also most likely not into tinkering. SAo no need to have it released before Mycroft has evolved mature enough into the end consumer market.

But I do believe that is exactly what the have planned. There is some roadmap / timeline type of picture somewhere. See if I can find it…

I’m not sure about that. For me, the likelihood that I’m going to feel comfortable tinkering with something is directly proportional to it’s cost. I’m pretty confident in myself usually when it comes to nerd type stuff, but I’m much more comfortable messing with a $10 item than I am with a $10,000 item. For me, a low cost option would increase my chances of tinkering. I could afford more units and if I blew one up on accident, it wouldn’t set me back nearly as much. Further, there are a lot of young people in colleges and high schools that LOVE to tinker with things, but where the price point is prohibitive, even if they’re only picking up a single unit. All in all, I hope this unit is closer rather than farther on their road map. It’s only my opinion, but I think it put a lot more Mycrofts on desks.

Fully agree on that (dutchie here), however was more talking about tinkering software wise.

The way that by the time mycroft is fully released all skill authors are about done as well.

The Mark Ia pictured above is the very first prototype. We put it together for a demo we did at a large retailer based in Arkansas. The final version will be much closer to Derick’s concept sketch. We want to keep the anthropomorphic features while also reducing the price below $50 ( ideally WAY below $50). We also want to put the driver on the underside of the unit so we can use the surface it is sitting on to reflect the sound and - ideally - improve the bass response without adding a large resonating chamber or passive drivers. That means putting the unit up on legs like the current Mark I.

Derick floated the idea of using light pipes and on-board LEDs to run the face plate. It may end up with interchangeable face plates - one for Mycroft users and other plates for speakers shipped under our retail partners’ brands.

When we ship these units is going to be dependent on how we distribute them and how many we sell with the first purchase order. What you see in the sketch is what we envision our final smart speaker product line to look like. The lineup provides both a low cost entry point ( Mark Ia) as well as a higher end system that can run your whole home ( Mark III [ which will include 3x Mark Ia satellite units ] ).

The Mark II already comes with a removable SD which should make it easy to tinker with. If you goof and brick the unit you can simply flash the default image back onto the SD and start fresh. If we can do that for all three products, we will.