Seasons Greetings to everyone! 2020 has been a big year, and we hope that 2021 will be different in so many ways. First and foremost we’re excited to get devices shipping very early in the new year!

The Development Kits are our first priority, and we’re getting ready to ship! (Yes, lots of exclamations in this update- we’re excited!) We have received almost all of the parts necessary to make our first production run of 400 kits, and we’re placing the order for our custom circuit board (the SJ201) today. We’ve added a custom speed-controlled 40mm cooling fan (the SJ222) to ensure the exposed circuit boards in the Dev Kits stay cool to the touch.

Since we’re using a new manufacturer for this run of SJ201’s, we’re doing the production in two stages. The first will be 20 boards to ensure that everything goes smoothly. In the past we’ve had companies put chips on rotated 180 degrees in the past. We will then do both automated and in-person testing of these samples, and assuming those check out we’ll immediately authorize the remainder.

All the final parts are being shipped to our fulfillment partner, Crate Crew. They produce HackerBoxes and have years of experience doing exactly what we need – carefully packing a detailed set of electronics and other components for end-users to assemble and experiment with.

Since our last report, we had to make two revisions to the SJ201, our audio front end daughterboard. We discovered an issue with the audio output jack, and then subsequently an error in choosing a clock buffer chip. Both were readily resolved and we’re now ready to go to production.

Now that the Dev Kit production is fully under way, we’re turning our attention to the Mark II production. In a way, this is nothing more than higher-volume production of the same product as the Dev Kit. However there’s a lot more to it than that. Starting with the fact that most people don’t want to build their own smart speakers from parts.

The major hardware change from the Dev Kit to the Mark II is the use of an injection-moulded housing. This is not only what people expect for an off-the-shelf product, but it’s a lot cheaper to manufacture in bulk. The first plastic enclosure will cost about $50,000. The second through 10,000th ones will cost about $1 each. Overall that saves about $10 per device in cost relative to the laser-cut enclosures. The second major change is having the whole thing assembled at the factory. There goes our $10 savings in plastics.

But before we commit to the million-dollar outlay for production parts and labor we want to have the Dev Kits in the field for long enough to ensure we didn’t miss anything regarding long-term stability, as well as testing the firmware and software update processes. So while we can gear up for Mark II production by getting the injection moulds underway and qualifying a final product assembly partner, we won’t have a solid ship date until we are confident in the performance of the Dev Kits.

Is there provision for backers to update shipping address/country details in anticipation of the MkII shipping date? Cheers

Who exactly are the “dev” kits being shipped to?.. clearly not backers.

The backers who signed up for the dev kits.
“### Mark II Dev Kit - Build It Yourself” (see
https://www.kickstarter.com/projects/aiforeveryone/mycroft-mark-ii-the-open-voice-assistant)

I must have missed that

You may need to scroll a tiny bit… 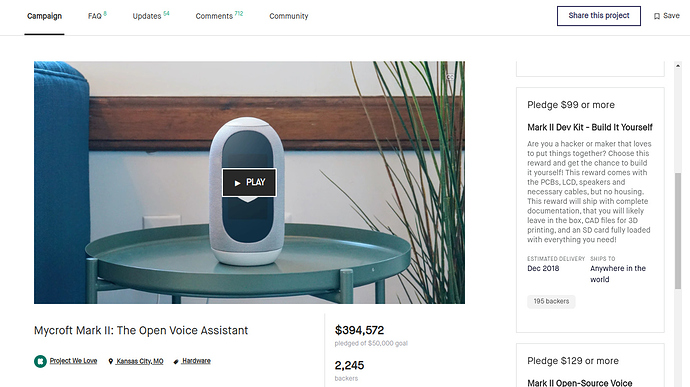