Just posted a fun and simple skill on Hackster.io, “Hey Mycroft, how many days until Christmas?” - used Padatious for the first time, works great! @Jarbas_Ai Thank you! 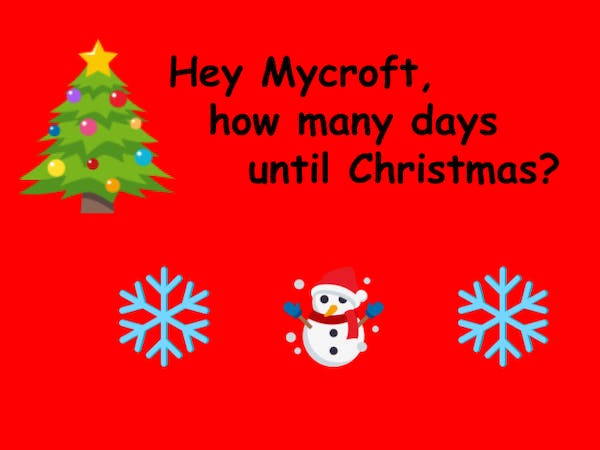 "Hey Mycroft, How Many Days Until Christmas?"

Merry Christmas and Happy New Year to the Mycroft team and community!

PS Project respects cost nothing, get me points for gift certificates from adafruit and sparkfun and are much appreciated!

Great write up! Respects given

you should add the skill to the official skills repo

I made a PR using some new mycroft functionality you may not be aware off, wait_while_speaking() and the audio service

Thank you for the compliment and respect!

I tried the audio service initially but the mp3 files were not playing. I believe I had the same issue that I had with the mp3 player that I mentioned in the write-up, such that the location of the mp3 files seems to be affect whether they play or not. When I put them in the main directory of the skill, they played, but i ran out of time to get the project written and posted. One of these days I will be able to do nothing but make voice skills for a living!

I will try to use AudioService after the holidays directing it to the mp3 files in their current location, because it was not generating an error in mycroft-skills.log file, just no sound was being played.

I can’t emphasize enough how great that tools like Padatious as they make modeling of voice commands very straight forward and natural! For this project the .intent file in the vocab directory worked immediately without debugging! I have also tried passing wild cards to an intent handler and this works perfectly as well!

Hey @gov that’s an awesome use of Padatious, kudos!

@gov btw, we’ve noticed that atleast for us, if you convert your audio files in .wav files and use the play_wav funciton from the mycroft utils, you would get better sound quality.

Got back from a busy bit of travel and opened my Hackster.io account to a Merry Mycroft Christmas! Thank you all for the respects from a lot of familiar names! Working on some new ideas for the New Year!

Thank you all once again!