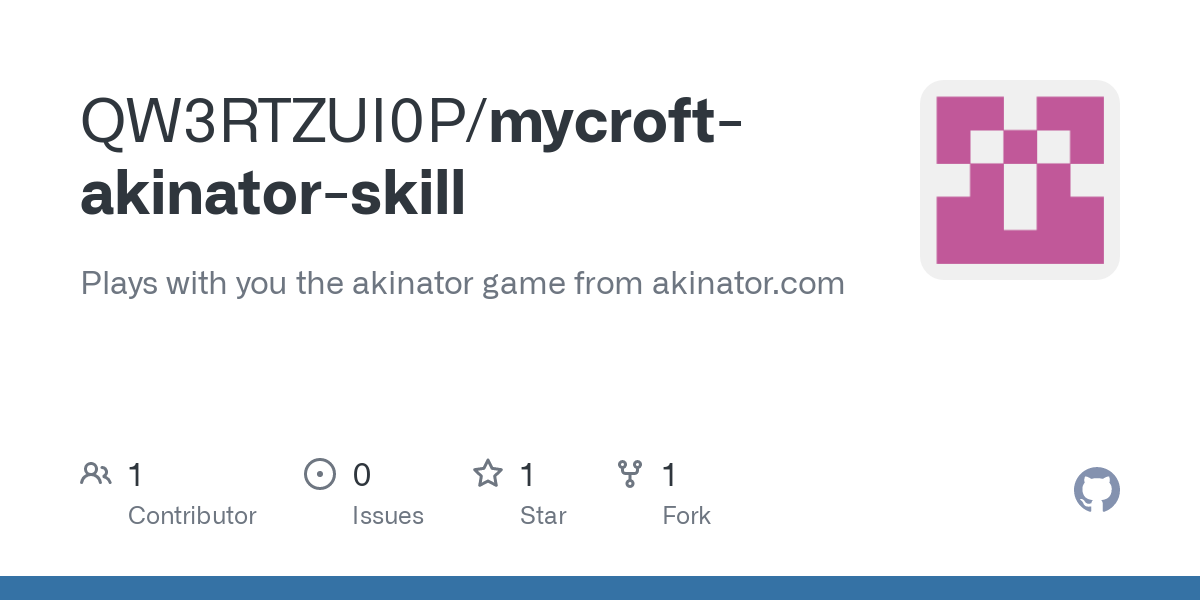 GitHub - QW3RTZUI0P/mycroft-akinator-skill: Plays with you the akinator game...

This is a simple skill that enables Mycroft to play with you the Akinator game from akinator.com. It basically is just a simple wrapper for this python Akinator API.

For those of you who don’t know, Akinator is a genie

that tries to read your thoughts. You think of any real or fictional character (and I mean any character), Akinator will ask you questions and try to guess who it is. Just install this skill, say “Hey Mycroft, start Akinator” and give it a try!
I got the idea for this skill back when I was still on the dark side (using Alexa). There is a very similar Alexa skill to this one that I really enjoyed playing with from time to time.

Then start the skill by saying “Hey Mycroft, start Akinator” or “Hey Mycroft, guess who I am”. Child mode (excluding inappropriate content) is enabled by default, but you can turn it off in the skills settings on home.mycroft.ai.

. I’m looking for feedback from anyone who wants to test a new game for Mycroft.

This skill currently only works in English and German and any PRs to support new languages (or any PRs in general) are very welcome! I haven’t tested it very thoroughly and bugs and small errors may very well occurr.

I have no control over the type of questions Mycroft / Akinator asks you, this skill only passes the questions received by the API on to the user.

I hope that there isn’t any other Mycroft Akinator skill that I overlooked (that’s what happened the last time I created a skill). Also I’m planning to submit this skill to the Mycroft marketplace if the feedback is positive.

I encourage everyone to try out Akinator / this skill! For me and my family it has been a lot of fun (the questions Akinator is asking are often very strange and funny) and another little game for Mycroft is imho never a bad thing (especially if you have guests at home and want to them show what Mycroft can do and why he is better than Alexa / Google Home

Thanks for reading and have a great day!